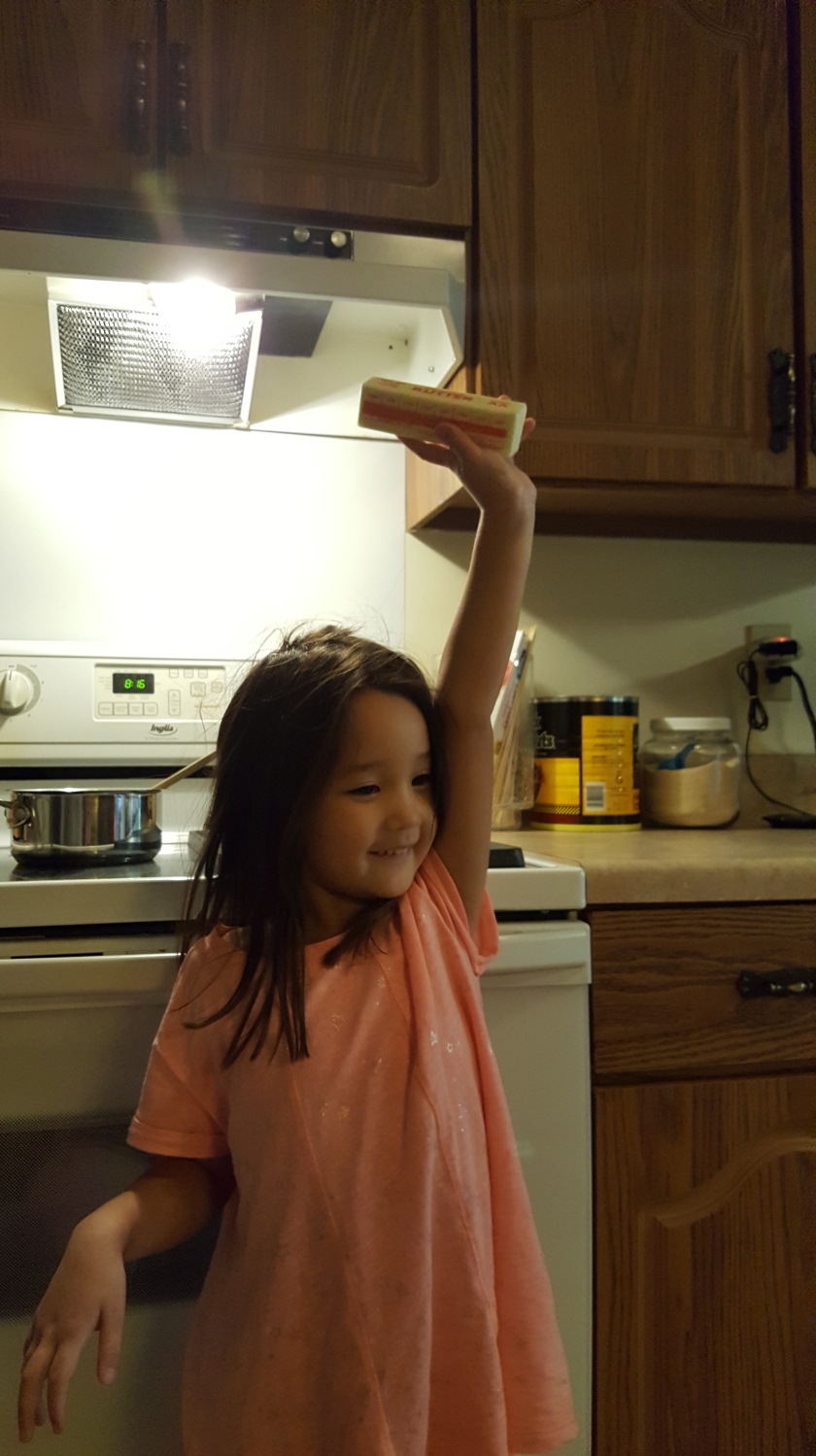 I watch food network a lot, and they are obsessed with butter. They think that’s a sign of ultimate richness, and each chef talks about it at some point.

What kind of confuses me, though, is that they reference it most often when they’re doing traditional Southern recipes. But, that doesn’t sound right. The south is a mixed-up place full of flavors. It’s never just been the place of butter.

See above for the picture of my grinning daughter holding up a stick like she just won a prize.

However, the Southern variety of flavorful fat in cooking is a beautiful thing.

If you make your mac and cheese with 2% milk or your grits with half ‘n half, you just made the “light” version.

Any and all pan drippings from a variety of meat can, and will, be made into gravy. That gravy goes on shortening biscuits or mashed potatoes made with butter, cream, milk, sour cream and cream cheese.

The recipes vary, but the richness does not.

How do the Southern ladies make beautiful sugar cookies covered in soft, fluffy icing that can be neatly tumbled into a cookie jar?

Shortening icing is soft, and it crisps up enough to hold its shape. Keep your buttercream for cakes and your royal icing for gingerbread houses. Shortening frosting for sugar cookie decorating is the best.

Shortening is also the shining, delicious reason why the calorie count in a single fluffy biscuit or a slice of perfect pie crust is higher than a plate of fried chicken.

Vegetables and beans taste amazing with bacon fat. If we slow cook or pressure cook, a couple of pieces of pork floating amongst the veggies is the only way to go.

If something comes “loaded” in Southern cooking, that typically means its sporting butter, sour cream, cheese, and pieces of bacon.

I don’t know why everything isn’t loaded.

Southern fried chicken is a special, beloved classic. We like to argue about the best fat for frying (it’s probably lard- we cut back and use peanut oil pretty often), but the real secret is soaking the chicken in rich buttermilk before we dredge and fry.

The south has problems aplenty, but there’s a reason why, for many people, the bulk of our cuisine is “comfort food.”

I don’t know if we could have gotten even as far as we have on just butter. We were never just butter.

Nod towards the gravy.

And vote to establish more parks and sidewalks, ‘cause we have to walk this richness off.